Feeding hyenas in Africa is but one of the unique experiences anyone can have on the great continent.  Africa is after all about the animals is not?  Excluding the Middle Eastern cultures found the northern Africa most travelers come to Africa to witness nature in its rawest form.

Interacting with Hyenas in Ethiopia is a unique experience to get up close and personal with an otherwise extremely dangerous animal.  Living in Eastern Africa for close to six months I had the opportunity to walk and interact with cheetahs, walk with Lions, feed a giraffe with my mouth, and even ride an ostrich. 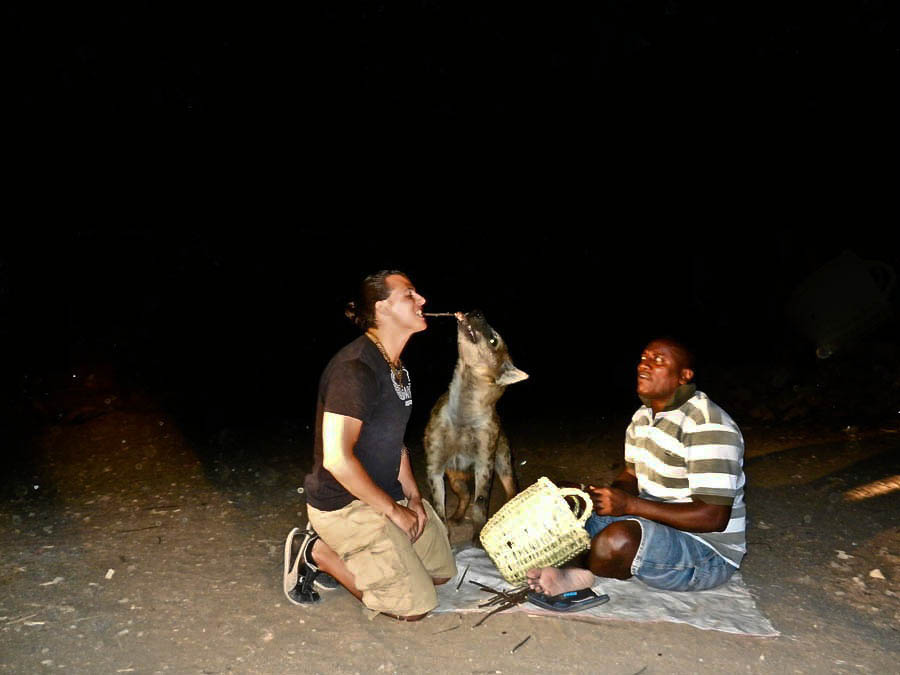 One couldn’t have known that feeding hyenas would be a tourist attraction.  It’s definitely something I was not aware of upon moving to Eastern Africa.

I fell in love with Ethiopia the moment I arrived in Addis Ababa.  Feeding Hyenas in Harar was just a bonus.

The people are incredible and the country is rising from its marred past.

The city of Harar isn’t only important for hyenas, the city also is the fourth most religious center for Muslims. It holds great history and is definitely a must-see upon one’s visit to Ethiopia.

Feeding hyenas in Ethiopia with your mouth? That’s just a plus.

The day started off with a brisk drive from Somalia to the border city of Jijiga, Ethiopia. There was an eerie calm passing through the Ethiopian countryside. The beauty and diversity of Ethiopia is something most people around the world fail to associate with the country.

Upon arrival one is greeted by the ancient walls that used to surround the old city. Five Gates that were originally built 500 years ago will arouse the curious mind.

Each individual gate held a unique role in the trade of the city.  The Northern gate was used to trade season peppers for example while the Eastern gate served trade that arrived from in land Ethiopia.

The city of Harar has been at the crossroads of trade routes throughout history.

Harar is also known as the city of Saints. 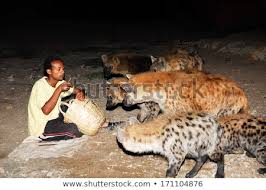 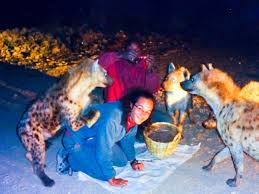 Only a holy man would conjure the idea of feeding hyenas, by the mouth of all things.

The history of Hararis (people of Harar) and hyenas are deeply rooted into the culture and folklore of the city.  Hyenas are supposed to take away evil spirits, djinn, and some people travel across the country in order to have this done.

Rumor has it that farmers began feeding the hyenas to ensure that their livestock wouldn’t be eaten. This started the habit and now the hyenas are called out 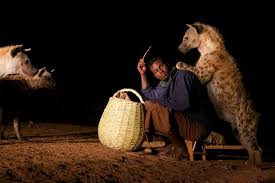 by name every single night to be fed.

There are only a handful of hyena men left.  The process normally starts by finding a location which resides near one of the city gates. A man yells out the individual names of the hyenas followed by a common Ethiopian phrases.

It is a good idea to hire a taxi so the entire feeding area is clearly seen with the headlights of the cars.

Once the hyena man settles down he sits and starts to call each individual animal one by one. It’s surprising to realize that the animals are more afraid of humans than humans are afraid of them.

Imagine if this was your job

The video at the end of the post will show how timid these creatures actually are even with a small group of people. Sometimes the hyenas get aggressive and fight for food.

I witnessed many locals getting hostile with the animals as if it was a kitten her dog outside.

It’s incredible to see how natural the city feels with the Hyenas. It is as if they were pigeons walking around a famous square in Rome or ants in a backyard.

The tourists start feeding the hyenas when the hyena man starts to call for volunteers. As courageous as telling a girlfriend the dishes will not be washed I proceeded forward and grasped a small wooden stick.

The hyena man looks into his basket of freshly shredded raw meat and selects a piece that will be placed gently on the stick.  It reminded me of how lottery numbers are picked.

The whole experience is incredibly unique.  It is so foreign to feed an animal that would normally be considered so dangerous.  A hyena’s jaw is unbelievably powerful. The animal has one of the strongest bites in the entire animal kingdom.

After warming up to the animal I placed the wooden stick in my mouth and prepared for my last days on Earth. There’s always a reaction when the hyena approaches.

It is an immediate survival instinct since the mind recognizes a deadly animal is interested in something that is in your mouth.

One can learn from experience that the second and third time are not more comfortable than the first.  Sometimes hyenas are found eating human limbs and there has also been stories of a hyena eating a baby.

Feeding hyenas in Ethiopia is one of the many reasons to visit the country. One will be surprised to find that hyenas are also used in Nigeria as pets and apparently bodyguards to collect on bad debts.

It is one of the reasons why visiting Africa is so unique. When one arrives in Harar just hail a local rickshaw and ask to be taken to the location where hyenas are fed.  Disappointment will be the last of your worries.

If so, please join over 50,000 people who receive exclusive weekly travel tips. exotic destination details, and my free guide to everything you need to know to d 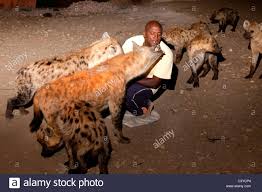 ay trade and travel around the world. Click the red button below!